Knowledge Economics and the 4th Industrial Revolution have many similarities, but they are not the same thing. A comparison shows how they are merging and may reveal the outlines of “the 5th Revolution”.

Knowledge Economics began as a theory proposed by Paul Romer[1] who suggested that societies advanced through the power of ideas. Democracy is an idea that had the power to advance societies. Circumnavigation of the globe is an idea. Sterilization is an idea that has saved millions of lives. None of these worked through industry.

The 4th Industrial Revolution posits that industry has gone through several stages of development. Each stage has “revolutionized” how “things” are made. The diagram below shows each of these stages. The 4th industrial revolution involves networked knowledge, learning from the data that is generated, and collaborating to solve complex problems. 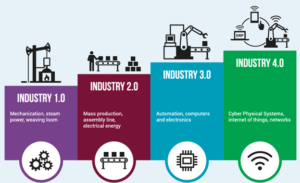 There has always been value in knowledge and ideas have helped societies progress throughout history[2]. It is the digitization of knowledge, however, and the building of knowledge networks that underlies the convergence of the theory and industrial trends. Below I briefly describe the most important convergences. Knowledge researchers are actively engaged in building theory around each of these – subjects of future blogs.

Digitization. For industry, digitization affects how machines and production gets done. Increasingly, the ability to digitize production replaces mundane jobs and also creates new types of jobs and industries.

Knowledge Networks. Machines talk to each other and add to knowledge networks. Educated people are those who know how to use knowledge networks to get information, create new ideas, apply knowledge to contexts and work with teams to solve complex problems. You can teach an eight year old some of these skills – but not if you define education as only about the three Rs[3].

Complexity. Data doesn’t just sit on a computer ready for the computer to analyze it. People have to help direct the data. Is the medical community targeting reduced costs, maximizing lifetime health or optimizing patient satisfaction in its “big data” formulations? All of these are complex questions – all overlap profit, social benefits, individual life satisfaction and world health.

Innovation. Knowledge Economics began as a theory of innovation. The entire concept of industrial revolutions is about continuous innovation. Without innovation, neither would exist.

Context. Ford Motors designs different cars for the Chinese markets than for the U.S. market. Designing solutions for sustainable communities is different for Botswana than for East Anglia. Pieces of knowledge are now viewed less as established fact than as ideas to be placed within a context[4].

There remain distinctions between the 4th Industrial Revolution and Knowledge Economics. Below I articulate these distinctions, but first two notes:

Note One: The only remaining distinction of any merit is around that of capital markets and how value is counted.

Note Two: In the 1st and 2nd Industrial Revolutions, and, possible, the 3rd, the value of goods and services from all sectors could be measured in monetary terms. NGOs received contributions, and performed services. Governments collected taxes and produced public goods. Businesses made profits and sold goods and services, and so on.

Markets. Industry, it has been assumed, exchanges value through capital markets[i]. On the other hand, knowledge flows among sectors – being created, stored, distributed, shared, adding value, and innovating across all sectors. [Knowledge market characteristics are for a future blog.]

Productivity. In a simplified form, Economists model national productivity as a combination of materials, labor (skilled and unskilled) and investments. In contrast, Romer’s knowledge theory initially caused Economists to add a fourth element – innovation[ii]. Innovation is not something a nation has to buy or own (like materials, labor or investments). Rather, a country “has” (creates) ideas. Thus, Romer called it “endogenous” (internal) theory.

Efficiency. Notions of efficiency are central to assumptions of mass production embedded in the 1st and 2nd Industrial Revolution. That is, industry maximized production relative to constrained (scarce) resources. This is called allocative efficiency. (In mathematical terms – maximizing profit relative to resource constraints). But, the price of knowledge decreases as quantity rises (think storage, fiber, cloud). Knowledge seems to be an ever expanding resource. Instead, a new efficiency is being defined – adaptive efficiency[7]. Knowledge-based industries need to be quick adapters to changing circumstances.

Knowledge Economics’ research initially focused on industrial innovation, but has expanded in scope. The shared characteristics of knowledge economics imply that industry is a partner in creating value. Knowledge networks create value most effectively when ideas are built collaboratively across sectors. Revolution 5.0 may be about linked knowledge networks.

[i]  It is widely held that GDP captures all productivity of a nation. Although, arguably, during the 4th Industrial Revolution, this has changed. Does Google actually send its product through capital markets?  Millions of people use its free services and Google culls the data of its users without paying them. There are increasing challenges to the assumption that capital market exchanges measure national well-being[5].

[ii] Econometrically, it started by adding the industry’s investment in researchers (a measure of industrial innovation) to the model[6]. Later, scholars realized that there were other problems with the model. For example, GDP did not measure all knowledge productivity, and knowledge had economic characteristics that did not conform to the mathematical assumptions of the model.

Lynn Ilon is a Chief Innovation Coordinator of Bayoom Hub – a global social enterprise based in Korea. Dr. Ilon is a global knowledge economist and applies this perspective to marginalized areas. She has lived in four regions of the world, worked in some 20 countries, and was a professor at top-ranked universities on three continents. She has consulted for the World Bank, Harvard, the UN, and numerous bilateral and multilateral organizations and NGOs.